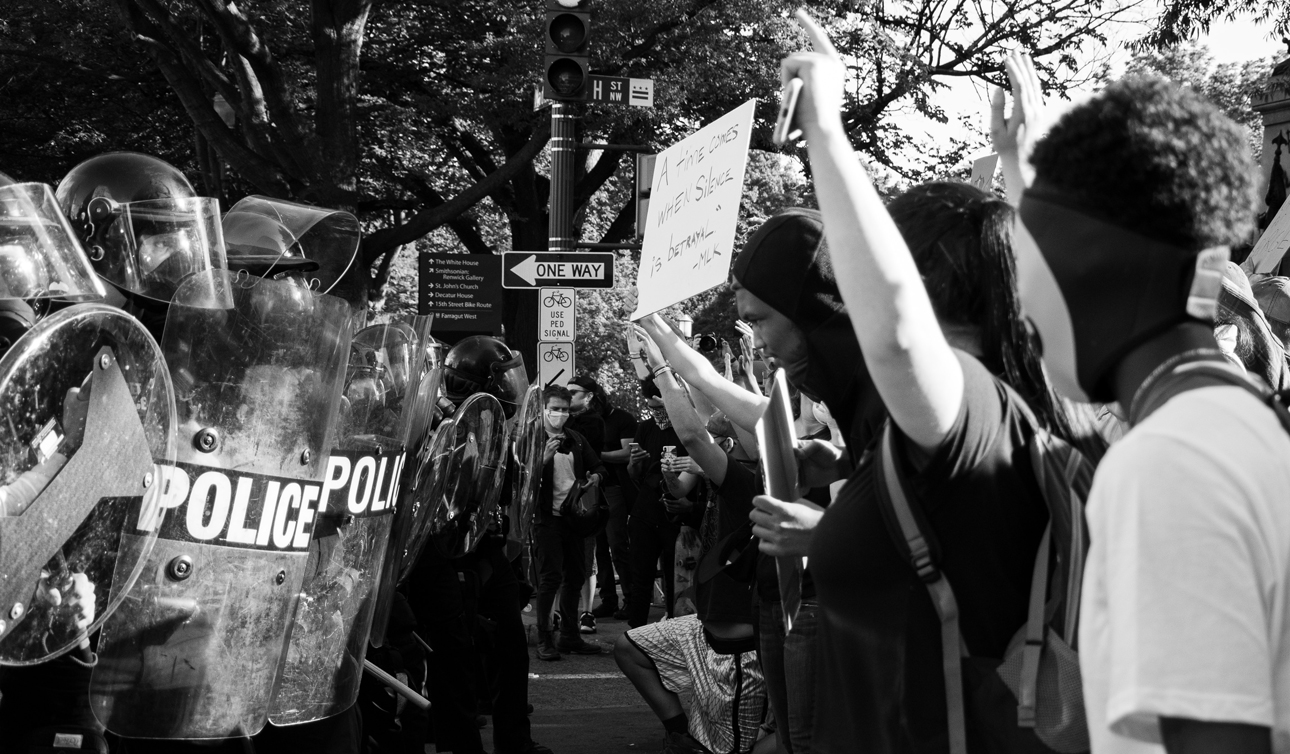 Just a week ago we earned our leadership roles by analyzing data, making smart decisions, and leading our teams.  Our efforts were rewarded with influence and authority.

Then, the national conversation and our culture shifted.  Now, we must earn our right to lead again under an expanded and more inclusive set of rules.

The old model left millions dispossessed by structural racism, inequality, and inhumanity. We inherited that system and our success often depended upon and perpetuated it.  Yes, those systems efficiently delivered what we designed them to: goods, services, and profits.  But, our design left out critical values that we no longer have the luxury of excluding.  Our models have been revealed as illegitimate because they are unsustainable for our fellow citizens, our Earth, and our own integrity.

To earn leadership now, we must unlearn much of what we thought was true.  We must hold open our minds to the discomfort of not knowing. This is not the time for mindless action. To unlearn the old ways, we must sit quietly with people we don't understand, those who are feeling pain, who are seething with anger, and who feel too unsafe to reveal their deep sadness. We need to invest our time and attention to find a deeper, wider, and truer understanding of their experience and our shared humanity.

Now is the time for leaders to step into the uncomfortable, the messy, the human. We must step into this moment to ask, to listen, and to design new models together. Together, we will find a more powerful, nuanced understanding of our common rights and responsibilities.

This is our work as leaders today.  Those leaders who rest in the comfort of their titles without doing this work will be left behind.

So there may be a thousand things to do- just keeping a family healthy or business afloat during a pandemic is a lot. But stop the doing for a moment. Listen.

You can start listening even if you are isolated in overwhelming responsibility or comfortable privilege. I have started by seeking out  the antiracist, poor, and disempowered voices I don't normally hear. Here are a few starting places I have have found:

Listen to the anger, listen to the pain, listen to the sadness.  Let yourself be cracked open. Your ways of looking at the world will be broken by the experience.  Any new model you use to make sense of all the voices and data you gather needs to take all those challenging, historically underrepresented human variables into account.

The pledge of allegiance we used to say to our flag each school morning ended with our shared American goals of "liberty and justice for all." I still believe in those values. As we lead ourselves, our families, and our teams, let’s make sure our actions actually move us closer to our ideals.

Photo by Koshu Kunii on Unsplash 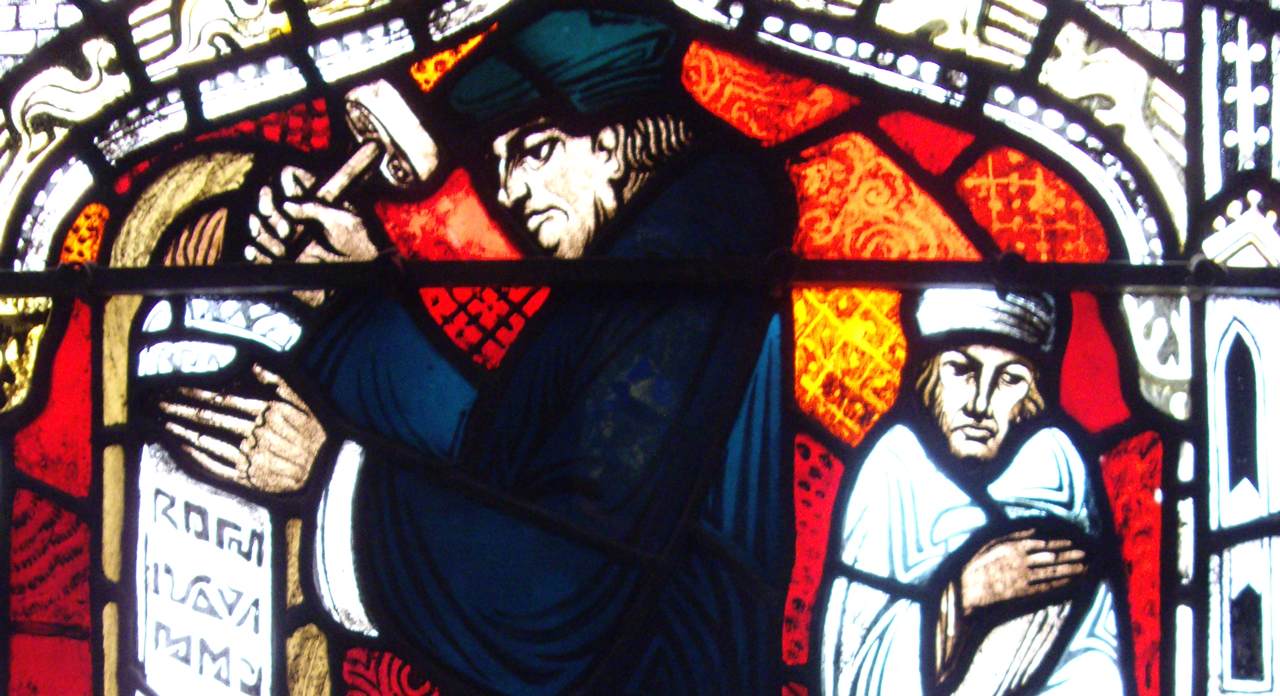 At the close of Drucker Forum 2017, Charles Handy called for a reformation of business enterprises. Frederick Bird and Henry Mintzberg responded with a tongue-in-cheek revision of Luther’s 95 Theses, their 9.5 Theses which included this paraphrase of Luther’s thesis #32:

Those who believe they can be certain of their salvation because they have achieved higher share value will be eternally damned, together with their consultants.

In the US, government seems to gladly allow enterprises to set their own scopes of responsibility, mainly shareholder value, even when that directly conflicts with the best interests of the employees and the communities affected by the production, transportation, and disposal of their products. (Here's a recent glaring example).

Could it be that in our zeal to separate economic and political considerations, we’ve absolved businesses of moral responsibility and stalled the conversation about the equitable distribution of costs, income and wealth?

This is a sensitive topic, but we need to be clear about who business is serving. As we produce more, how do we determine how gains are distributed? Already 13% of the world’s population is undernourished, despite an abundant food supply. As W. Brian Arthur of McKinsey recently wrote:

The economy...produces enough in principle for everyone, but the means of access to these services and products, jobs, is steadily tightening. So this new period we are entering is not so much about production anymore—how much is produced; it is about distribution—how people get a share in what is produced. Everything from trade policies to government projects to commercial regulations will in the future be evaluated by distribution. Politics will change, free-market beliefs will change, social structures will change.

As automation makes production and labor cheaper and shareholders lock in gains via share repurchases, some are already insisting on more equitable distribution of profits, like the $15 minimum wage movement in the US, or a Universal Basic Income.
Arthur anticipates “a Scandinavian solution: capitalist-guided production and government-guided distribution. Europe will find this path easier because a loose socialism is part of its tradition. The United States will find it more difficult; it has never prized distribution over efficiency.”

Avoiding the Evils of Socialism?

Let us be clear, not all Americans are misinformed about the extent to which our country is already a corporate welfare (or socialist) state. Our Medicaid system pays premium prices to big pharma, taxpayers clean up and pay for the collateral damage of innumerable industries: opioid abuse, corn, snack and tobacco companies whose products cost Medicaid billions, farm subsidies, bailouts for banks and auto companies, subsidization of highways, defense contractor premium pricing, security for oil producers in the Middle East and beyond. Nevertheless, socialist wealth distribution to individuals remains anathema for many politicians. Here in the US, the conversation about access and distribution will most likely remain the responsibility of individual citizens and a few “radical” elected officials until reason returns to conservatism.

If we let enterprise and government leaders define the scope of their responsibility, we can assume that many will be self-serving. Public company management teams seek to manipulate their stock prices (and bonuses) by repurchasing shares rather than investing in creating jobs, minimizing impacts, increasing production capacity or new offerings. In fact, Goldman Sachs recently reported that stock buybacks are exceeding capital investment in 2018.

We can also expect that the communities who are absorbing the incidental damage of our industries will be demanding a larger role in future decisions. Robert C. Wolcott in HBR states, “history suggests that concentration of wealth in too few hands leads to social pressures that will either be addressed through politics or violence or both.” If inequality continues to grow, automation causes significant unemployment, a recession hits, and/or geopolitical conflict flares, our liberal democracies will require morally reinvigorated leadership to survive (France's gilets jaunes protests are only one recent example).

We can wait for governmental regulations, which will be mired in political torpor and which corporations will most certainly fight, or we can recognize our own power as workers and consumers of products and begin to affect change ourselves.

Both leaders and workers are implicated in the actions of enterprises they work within or patronize. If you participate in an industry that earns profits by exploiting workers, natural resources or the environment in ways that are damaging and unsustainable, then you are morally implicated in those actions. As a consumer of the products of these industries, you are implicated, too.

“Tell me what company you work for and I will tell you what kind of human you are.”
- Emmanuelle Duez at GPDF 2018

As individuals, we each have at least three forms of capital: labor, money, and social capital (our networks and reputation). It is time to take stock of both our own values and our own power.

How are we implicated in the larger impacts of the businesses we serve, invest in, and patronize?

What is the quality of leadership we are offering and accepting?

Who and what will we be optimizing for?

Who do we want to be in this time of great change and opportunity?

How do we begin to hold ourselves and our leaders more accountable for impacts on ourselves, our society, and our world?

We should not fool ourselves into believing that our work has no impact on our ontology, or who we are being in the world. I can imagine a future in which I am asked, “How did you help fight inequality, climate change and mass extinction, Grandpa?” Today is the day I am given to start creating my answer to that inevitable question.

At the Humane Leadership Institute, we’re interested in creative conversations around what might be a more humane approach to leading ourselves and each other. How can we actually produce the greatest good for the greatest number effectively, profitably and humanely?

We believe that individuals empowered to communicate, collaborate, hold accountable, and humanely lead can conduct business in a way that generates productivity gains, engagement, shareholder returns and benefits to our communities. These empowered citizens, workers, and leaders can use their own capital to hold themselves, others and enterprises true to their values while creating the goods and services we all need.

We hope that you will join the conversation at the Humane Leadership Institute. We are collaboratively developing the tools for individuals and teams to practice identifying and clarifying the values they want to bring to their workplace and the world. We seek to make those aligned with their own highest values even more effective at self and team leadership.

Join us, there’s still time and much to do.

In reclaiming her own integrity and future by resigning, a Florida teacher in the Orange County Public Schools (OCPS) made a powerful statement about our need to stop following leadership that doesn’t know how to lead. The teacher wrote:

“Florida’s startling attrition rate of 40% for educators [in the first] five years [of teaching] …. means my woes are shared by many. “OCPS Means Success” doesn’t mean squat if those measuring the success only recognize a specific brand of success, and continue to ignore the needs of their educators and students.”

Managers who fail to meet our basic human needs while hiding behind standards and data, have not earned the right to lead us. The current leadership structure may have role-based authority but they also must earn the trust and influence required to lead us. Of course, some educational leaders are doing great work at the nearly impossible task of meeting the changing needs of children, society and the imposed standards, but, clearly others are not meeting the needs of teachers and students.